4 Engineering Mishaps you Can Avoid 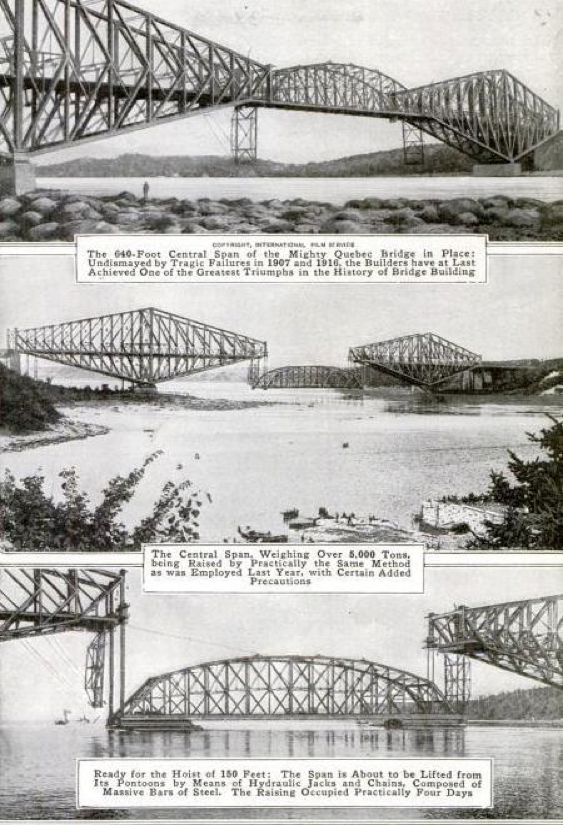 Mankind, for all its genius and astonishing achievements has come a long way, but it is still far away from being infallible. There have been advancements, however, there also have been equal number of debacles. For example, consider the incident of Titanic sinking. Undoubtedly the damage caused was due to the clash with the iceberg, but had the internal system of the ship been free of flaws, the impact would have been significantly lower. Here are 4 examples of engineering failures in Canada:

Quebec Bridge, which is the longest cantilever bridge in the world, is a riveted steel truss that is 987 m (3,239 ft.) long and 29 m (94 ft.) wide. The bridge that was expected to be an engineering wonder did meet expectations, but at the cost of two collapses even before its official opening in December 1919.

The first incident of collapse occurred on 29th august, 1907 and the second occurred after 9 years on 11th September 1916. The project that failed twice due to faults in technical factors such as curvature in cantilever and low buckling capacity ended up claiming over 86 innocent lives. The mishap was so massive that it is still deemed as one of ‘Canada’s worst engineering disasters’.

The incident that occurred in CIL’s petrochemical plant in April 1982 is a classic example of an engineering disaster. The explosion that damaged the company’s polyethylene plant was caused due to vibration in the reciprocating compressor. The vibration was triggered from a gas leak in the building, housing the plant. When this gas leak combined with the excessive movement in the compressor, it led to a massive explosion.

TransCanada, which is one of Alberta’s favorite energy companies, has also been a victim to engineering mishaps. The incident that took place in April 2002 was mainly caused due to stress corrosion cracking. Despite taking preventive action against corrosions, the company still had to deal with the explosion that its pipes caused. This is why this incident is an engineering disaster.

On thorough investigation of the cause, it was found that the incident occurred due to: separation of the pipe’s coating from the surface, a fluctuating water table and the presence of anaerobic bacteria in the pipe.

Consequently, after the incident, TransCanada retested its pipelines, conducted excavation tests and took other measures to prevent another incident of stress corrosion cracking.

The Lac-Megantic rail disaster was an incident of derailment that occurred on 6th July in 2013, claiming the lives of 47 people. The train that was carrying "highly volatile" oil from the Bakken region, derailed due to engineering failure such as insufficient brakes, engine troubles and weak safety training for Montreal, Maine & Atlantic staff. The derailment besides claiming lives of people also led to explosion of multiple tank cars and destroyed about 30 building in the town’s center. Half of the downtown area was also destroyed.

Disasters are prone to occurring, the key to avoiding them is by designing systems in such a way that they failure can be avoided, at least the catastrophic failures. Today, through analysis and study of previous engineering disasters, modern engineering designers can learn what not to do and how to create designs with minimum chance of failures.